field report and garden observation...along with my opinion...well in above video david talks about covering up nodes..well this patch was trying to get out of its perimeters so i tried moving a few vines early on. well even short vines when i started to fold them inwards inside area had already sent down a tap root. often 2 inches and side shoots as well. it was like a screw holding vines down. i am now of the opinion after seeing this throughout patch its a waste of time to cover the vine and maybe..just maybe doing more harm covering the vine with dirt?i have not gotten rain for awhile now and worried about production. so far first to bloom has fruit half size of soccer ball.i think they are the small sugar pumpkin.the others are just now showing hint of blooms coming on and entire patch is going to overtake tomatoes and more.they are going outside fence even. 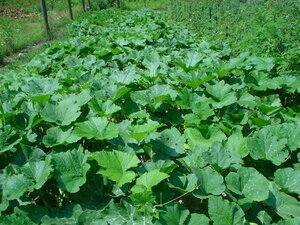 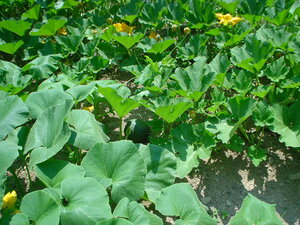 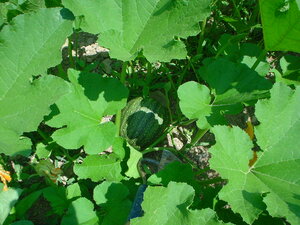 i went to the woods because i wished to live deliberately to front only the essential facts of life,.......,and not,when i came to die,discover that i had not lived...Henry David Thoreau

Yep. Mine look like that and are about 3 feet tall. It's a real easter egg hunt finding the summer squash right now. I thought I gave them tons of room, but no.....
J

Crabapple, Knowledge is power, Skill is trade, Experience is Priceless FAMILY: people will harvest the fruit of my labor.

This fall's crop of pumpkins are in at the produce stand. They have the wildest looking squash. Took these today. One was called "wart squash", another "brown grizzly bear". 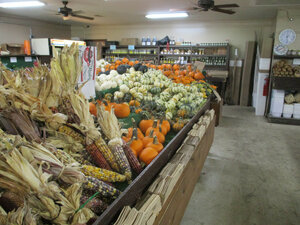 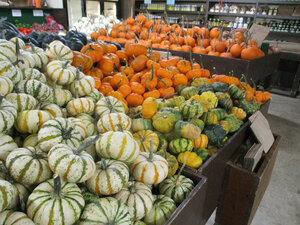 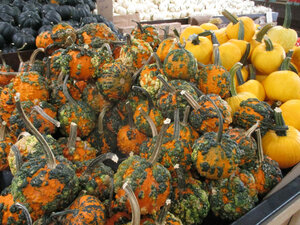 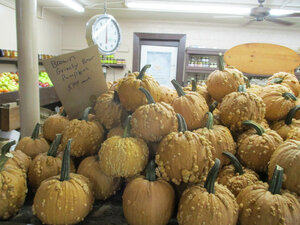 Thank you for posting in this thread. I've been thinking of it and need to watch that first video so that by spring I can grow a squash that won't cross with the neighbor's giant pumpkins that they grow every year.
I would like to try mashed potato squash, delicatas or cushaw. I already know spaghetti squash will cross with the big orange orbs!
Whatever you look for, that's what you'll find. (Quoteth me)

harvest results..i pulled these this afternoon from garden. 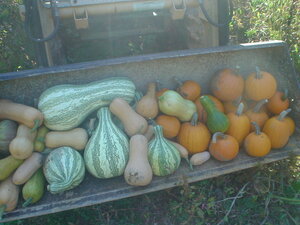 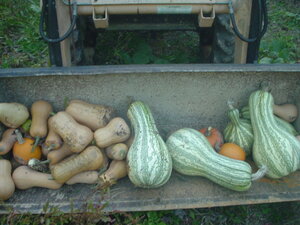 i went to the woods because i wished to live deliberately to front only the essential facts of life,.......,and not,when i came to die,discover that i had not lived...Henry David Thoreau
J

elkhound,
WOW! Nice crop.
Which do you like best taste wise & how to you store them, whole in cool place, freeze, dry or canned?
Crabapple, Knowledge is power, Skill is trade, Experience is Priceless FAMILY: people will harvest the fruit of my labor.

Very nice Cushaws and Butternutts. What are the Orange ones? Looks like a birdhouse gourd as well

Bacpacker said:
Very nice Cushaws and Butternutts. What are the Orange ones? Looks like a birdhouse gourd as well
Click to expand...

i only grew the 4 species in picture on page 1. south anna butternut,small sugar pumpkin,strawberry crown and cushaw. i only had a couple seeds of strawberry crown and i thought i didnt get any. vines died early and i seen first fruit rotted in garden real early. i found 3 off in bushes so i got seed now.the ones that look gourdish are butternuts that were still green and growing.i pulled them but found out something..they are super soft..the hard stems on other ones poked holes in a couple. thank goodness there were not to many. i left a couple to harden off instead of pulling them.i seen a few with slim necks on butternuts but i think its just from drought. i seen one that was ribbed on bottom a bit i am sure its seminole dna coming out as the south anna is a stable cross of those two. but i think some genes surfaced which is fine it was only on one. this still is a pretty new heirloom cultivar to my understanding.

orange ones are small sugar pumpkin.

i have cooked one butternut and it was real sweet...tasted like sweet potato to me.

@joel just going to leave them whole and use as needed.

edit to add...this little patch of pumpkins was pretty easy to grow. after the planting i hit it with tiller 2 or 3 times and then vines were out in walk area of rows so that was end of that using tiller. i had ragweed pop up and hit them early on and hoed around hills once getting everything else and it was very little.the growth on these just out performed everything and really smothered everything out.after first tilling and hoeing that was it. i might have spent a total of an hour of hoe work..but doubt it was that long on these 2 rows.even after plants died back hardly any weeds grew and i can still see over 90% of dirt now.the south anna were most vigorous and even though at hill planting they died where the vines cork screwed into ground they just kept growing and growing and growing all across garden and even outside it.

praise Yah for great harvest ! halleluYah halleluYah !
Last edited: Tuesday at 4:34 AM
i went to the woods because i wished to live deliberately to front only the essential facts of life,.......,and not,when i came to die,discover that i had not lived...Henry David Thoreau

It sure is squash season. I’ve been buying squash and eating them baked and making squash soup with leftovers.
Honor student: School of Hard Knocks.

Our butternuts are really sweet this year. Our neck sizes on them vary from almost as thick as the bottom to long and slim.
J