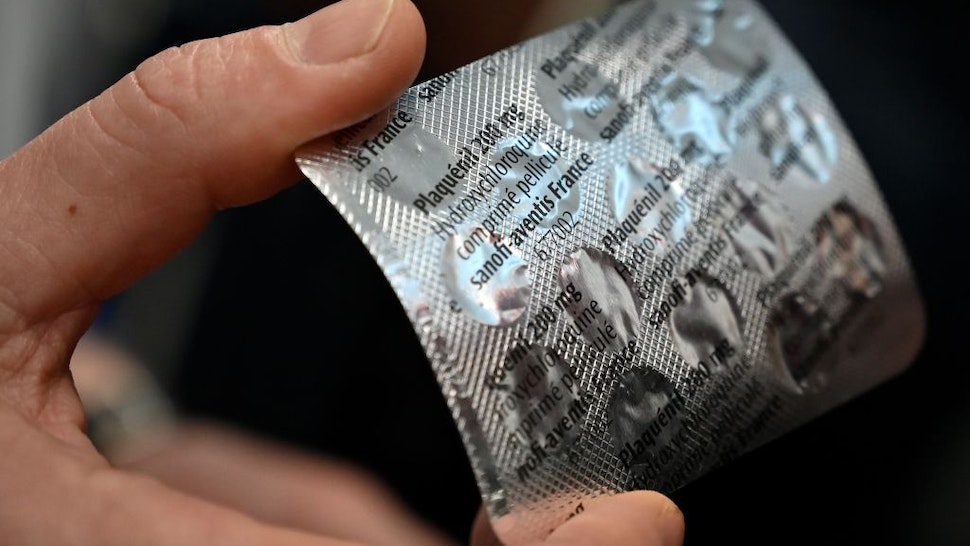 Photo by Gerard Julien/AFP via Getty Images
Facebook
Twitter
Mail
A 52-year-old man who contracted the coronavirus and said he spent days in the ICU unable to breathe said good-bye to his wife and children on Friday night as he prepared to die. Then a friend sent Rio Giardinieri news of the drug hydroxychloroquine working on coronavirus patients, prompting Giardinieri to contact an infectious disease doctor who warned him it was still incompletely tested, but acceded to his request and prescribed it for him.

According to Giardinieri, the next morning he felt normal.
Dr. Anthony Fauci, the government’s top infectious disease expert, has warned about assuming anything about hydroxychloroquine just yet, saying, “Many things you hear out there are what I call anecdotal reports. They may be true, but they’re anecdotal… If you really want to definitively know if something works, you have to do the kind of trial that you get the good information with.”
As Fox 10 Phoenix reports, Giardinieri is the “vice-president of a company that manufactures cooking equipment at high-end restaurants in LA and around the world.” Giardinieri told the station he had a fever for five days, terrible back pain, headache, cough, and tiredness, and was sleeping roughly 15 hours a day instead of his usual five hours.
Giardinieri said his doctors did not want to see him; he said he traveled to Joe DiMaggio Children’s Hospital in Hollywood, Florida, where he nearly passed out before he was diagnosed with pneumonia and coronavirus. He stated he spent a week in the ICU where he still had trouble breathing.
He said of his situation on Friday night: “I was at the point where I was barely able to speak and breathing was very challenging. I really thought my end was there. I had been through nine days of solid pain and for me, the end was there. So I made some calls to say in my own way goodbye to my friends and family.”
But a close friend alerted him to the positive stories about hydroxychloroquine and urged him to take the drug. Giardinieri said of the infectious disease doctor he spoke to: “He gave me all the reasons why I would probably not want to try it because there are no trials; there’s no testing; it was not something that was approved. And I said, look, I don’t know if I’m going to make it until the morning because at that point I really thought I was coming to the end because I couldn’t breathe anymore. He agreed and authorized the use of it and 30 minutes later the nurse gave it to me.”
Giardinieri said that within an hour after the IV pumped the medicine into his system, his heart felt like it was beating out of his chest. He recalled, “They had to come in and get me calmed down and take care of me. I had another episode about two hours later where I just got to the point where I couldn’t breathe and my heart was pounding again, so they gave me some Benadryl through the system and something else. I’m not sure what it was. It allowed me to go to sleep and when I woke up at exactly 4:45 in the morning, I woke up like nothing ever happened.”
Giardinieri, who took another three doses of the medicine on Saturday, concluded, “To me, there was no doubt in mind that I wouldn’t make it until morning. So to me the drug saved my life … I just want everyone to know there’s an option. You don’t have to just sit there and hydrate. There’s a medicine that’s working.”

A 52-year-old man who contracted the coronavirus and said he spent days in the ICU unable to breathe said good-bye to his wife and children on Friday night as he prepared to die. Then a friend sent Rio Giardinieri news of the drug hydroxychloroquine working on coronavirus patients, prompting...