Hey Baby, wanna get our tyvex suits on and play decontamination? 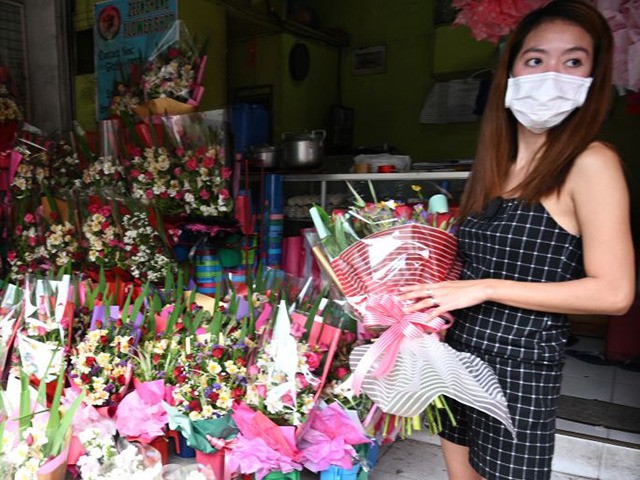 Many couples around China and other parts of Asia were forced on Friday to get creative with their Valentine’s Day after being separated by efforts to contain the ongoing outbreak of coronavirus.

The South China Morning Post reported that on the Chinese social networking platform Weibo, the hashtag #ValentinesDay had gained over 12 million posts and more than 5.5 billion views.

Some of the ideas for couples separated by the virus included video calling each other over dinner, sending gifts of digital money, singing songs via the popular karaoke app Quanmin K Ge, and sending drones to deliver parcels and other physical objects.

Others decided to get creative with their Valentine’s Day gifts as many ordered them online well in advance to ensure they arrived on time. This week, searches of masks, goggles, and antiseptic cotton have risen three-fold. Chocolate also proved a popular choice, with JD.com’s local delivery affiliate Dada-JD Daojia reporting a 700 percent increase in sales between Saturday and Thursday compared with this time last year.

In Hong Kong, flower markets lamented the sharp fall in sales ahead of this year’s celebrations, which usually make for a bumper week for businesses seeking to cash in on the long-lasting tradition of handing flowers to your loved ones.

“It’s much worse than previous years, not many people are going out onto the streets because of the virus,” the art director of a flower shop, Aman Fong, told AFP, adding that stock dropped significantly as many of the key suppliers on the Chinese mainland are closed because of the virus.

Instead, many people actively hoped to receive protection from the virus, with a third of respondents telling a customer survey carried out by Hong Kong Romance Dating that surgical masks and hand sanitizer were the Valentine’s Day present they were most hoping for.

Many businesses are also bracing for far fewer customers, particularly in restaurants usually fully booked on Valentine’s Day. In some establishments, owners are putting up plastic separation barriers between their communal tables, while various cinemas are only selling tickets for every other row in an effort to widen the distance between customers.

The virus, which broke out in the city of Wuhan, China, still remains classified by the World Health Organization as an international health emergency. As of Friday afternoon, there were nearly 65,000 cases confirmed worldwide, the vast majority in China. Close to 1,400 have died, while around 6,800 have already made a full recovery.
Click to expand...

I messed up with a card, a can of Planters cheese balls and dinner
Those who would give up essential liberty, to purchase a little temporary safety, deserve neither liberty nor safety. Benjamin Franklin (1706-1790)

Nothin' says I love you like a bottle of Purell and N95 masks. It just makes my heart flutter. LOL!

dademoss said:
I messed up with a card, a can of Planters cheese balls and dinner
Click to expand...