I did some testing of ham radios and antennas. I was comparing two 5 watt handheld radios:
I was also comparing two antennas:
For feedline to the J-Pole I was using high quality cable, 18 feet of ABR240UF (equivalent to RG-8X coax) connected to 3 feet of RG-188 thin coax. The J-Pole was at ground level and line of sight to the repeater is blocked by a 15 foot rise earthen hill and a metal water tower. I took zero care in routing the feedline - it was bundled in a coil and thrown wherever I needed it to go. The J-Pole was only about 3 feet away from the radios. Obviously the feed line was far longer than necessary, but that's what I had on hand. And the J-Pole was also about 3 feet away from my metal Weber grill and roof rain gutters. I was receiving/transmitting to our clubs 2 meter repeater, a Kenwood TKR-750, 50/25 watt that is located 17 miles away.

Here is a picture of my setup (worthy of a front cover layout on Consumer Reports - ha!) 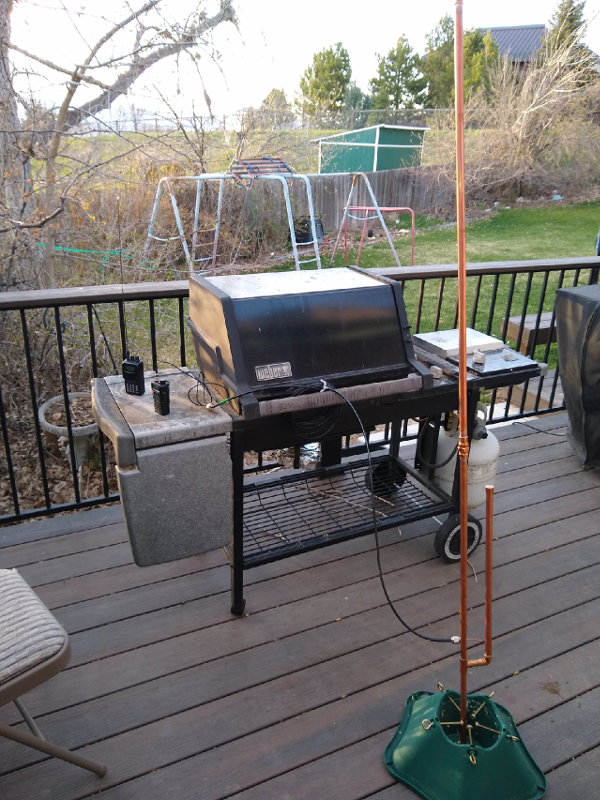 The larger radio in the picture is the Yaesu, shown here with the whip antenna installed. The smaller radio is the Baofeng, which is connected to the J-Pole (which is conveniently propped up in a small Christmas tree stand!)

Our clubs weekly net started up, and I started testing.

All cable connections were taken apart and re-done. All tests were run a second time. Identical results to the first set of tests.

It might be thought that the Baofeng was just a non-functional radio. So I tried some more tests with a strong signal - the local NOAA weather broadcast. The Baofeng was able to pick this up with all antennas, even the really cheap OEM rubber ducky it came with. Similarly, I was able to receive from and trigger a different, really close repeater with the Baofeng. In order to hear anything out of the Baofeng I had to turn the volume up to max, and additionally hold it close to my ear. The Yaesu was comfortably loud listening to these same transmissions at half volume. The build quality of the Yaesu, its ease of use, its ease of programming, its feature set, are commensurate with its 7x cost over the Baofeng. The OEM rubber ducky antennas supplied with both the Baofeng and the Yaesu are pretty crappy. Replace them ASAP. In an earlier test of these rubber ducky antennas, I found that on a weak-to-middle strength signal, the Yaesu with rubber ducky measured S3 for signal strength and when I put the SignalStick whip antenna on, that improved to S5 to S6. I was not able to complete a similar measurement on the Baofeng (difference between its rubber ducky and the whip) because it just has that fake signal strength meter.

I don't think I need to interpret the above results for anybody, things are pretty self-evident. You can draw your own conclusions.

I have both Ht's used in your test. Yeasu is the hands down favorite. I've used mine for many years and had zero problems. We actually have 3 of them and 1 FT-50. Factory rubber ducks suck no matter the manufacture. the long then whip types are much better. The j-pole is another step up from that. Elevations improves things as does a good low loss coax. RG-8X is a good coax.
Your doing some good testing. Best way to learn what your gear will and will not do.

It’s odd the Baofeng couldn’t hear the repeater even with the J-pole. Are you sure the frequency step was set correctly? When you said it wasn’t picking anything up I was thinking of setting it to the NOAA frequencies, glad you thought of that!

I like the Christmas tree stand, might have to steal that idea I use the Smiley Tri Band on my FT-60, it works well in our area. TRI Band

My BF hears ok, but won't make the trip to the Slush Puppy factory in simplex from a lot of places the FT60 will.
Dave

I will support and defend the Constitution of the United States against all enemies, foreign and domestic.

kd4ulw said:
It’s odd the Baofeng couldn’t hear the repeater even with the J-pole. Are you sure the frequency step was set correctly?
Click to expand...

The Baofeng has been able to pick up the club repeater, or rare occasions, from other locations (still 17 miles away however) with these same settings. Broken transmissions, but I could hear that there was something going on, even though it was not usable reception. I said "rare occasions". Actually, I should have said "once". The planets must have all aligned that day. I haven't received from the club repeater since.

Update on the Baofeng signal strength icon. Today I was able to see it displaying an antenna with no bars. That is new. So I have seen this icon off, on with full bars, and on with zero bars. So maybe it's a bit more than I originally thought. It has at least three states. The "antenna icon with no bars" appeared when the radio was sputtering, trying to break squelch, when there was no signal to receive but plenty of extraneous noise present (my two computers sitting right next to the radio). Once I noticed this, I manually held the squelch open - there was no signal, but the icon changed to an antenna with full bars. So it seems this "signal strength meter" has more to do with breaking squelch than anything actually related to signal strength. Hard for me to say exactly what it is trying to represent.

Thanks, Haertig, this is interesting. Baofengs and their ilk are great introductory radios that help get people into the hobby, but there are far, far better radios out there. My Kenwood TH-F6a outperforms the Baofengs all the time. But every radio I have is able to receive from a repeater ~30 miles away. This is due to the height of that repeater - 2500'. It sounds like your club repeater doesn't have line-of-sight to your location - you mentioned the berm and water tower.
“The whole aim of practical politics is to keep the populace alarmed - and hence clamorous to be led to safety - by an endless series of hobgoblins, most of them imaginary.”
- H.L. Mencken
You must log in or register to reply here.
Share:
Facebook Twitter Reddit Pinterest Tumblr WhatsApp Email Link