Menu
Log in
Register
Install the app
You are using an out of date browser. It may not display this or other websites correctly.
You should upgrade or use an alternative browser.

Thanks, Frodo. I posted in my thread about the float switches to see if Valveman will reply. I think that's his username over there. It's great to hear form you, btw.

I went to TSC and there was no replacement float switch-- not even listed on their website anymore. Saw on Amazon they want almost $100 for the switch. Cheapest I found was about $72 (I have to factor in sales tax for my area).

I'm thinking of just ditching the whole float thing and going with sensors instead. It's actually cheaper at this point and and I found an option that comes with a controller and can handle up to 250v.

It would take a few days to get here, but we still have water in buckets and my friend said since we bought everything in his bathroom for him we are welcome to use his bathroom anytime. He said if he has time before work tomorrow he's going to come out with a tester to see if any of the wires are bad. Since he's a certified electrician he's going to look over wiring diagrams on that switch controller thingy for me.

I love reading all about your projects. It's really interesting.

Thanks. I wish I would get in gear and get stuff done but I need help with it and good help is hard to find around here.

I love reading all about your projects. It's really interesting. Moreover, it inspires me to make repairs to my bathroom. I think that soon I will purchase new bathroom furniture, and I will already be engaged in the design and design of our new bathroom. Thanks to your post, I learned some important points while doing repairs. Most of all I liked the light and the installation of the floor. Thank you for sharing your project with us. Good luck to you. I hope you will see my post, my friend. See ya.

@Astralopitec I hope I can get myself inspired enough to actually work on things more. I've had zero energy lately. My doctor thinks my thyroid meds are not absorbing properly or that I may need to up my dosage.
I would recommend if you are going to buy furniture for the bathroom (such as a vanity) that you go with solid wood like something from Surplus Warehouse/aka Barton Home Outlet. They have unfinished oak vanities. The particle board/mdf stuff does not handle moisture well.
You may tag me when you make your post so I can be sure to see it. I'd love to see it.

I forgot to mention that the windows I ordered months ago FINALLY came in. They e-mailed me today to let me know they arrived. Claimed they arrived on the 7th but didn't notify me until today. They were much lighter weight than I expected- especially for double-pane glass. I have them in the workshop for now.

So, now that I have my toilet in my bathroom I am still thinking about this project. I was looking at my sketches and where I was putting plumbing and thought that maybe I should move some stuff over so its easier to access behind the dryer. I also started thinking about covering the gap between washer and dryer. I was thinking some plywood on top but then that isn't really great for damp areas & I don't want to put pressure treated there and then I thought about plexiglass. There's a sheet on HomeDepot that is a little over $80 or I could see if I have any in the workshop-- pretty sure I do have a sheet down in the workshop. It could then be cut to size and butt up against the wall and have ledgers on the walls to support it instead of putting a shelf behind the machines. I figure it could but in to the window sill a couple inches- still leaving room to open the window and it would let in more light and allow me to see behind stuff more easily.
I was going to have the pipe for the washing machine drain go down right next to the dryer but then I remembered my states' code allows for a 6' trap arm and it's less than 6' from the trap. I could either put it inside the interior wall and have a cleanout access poking out or put it next to that wall and have the cleanout.
My sketches don't how the cleanout as I don't have the model to plug in just yet. 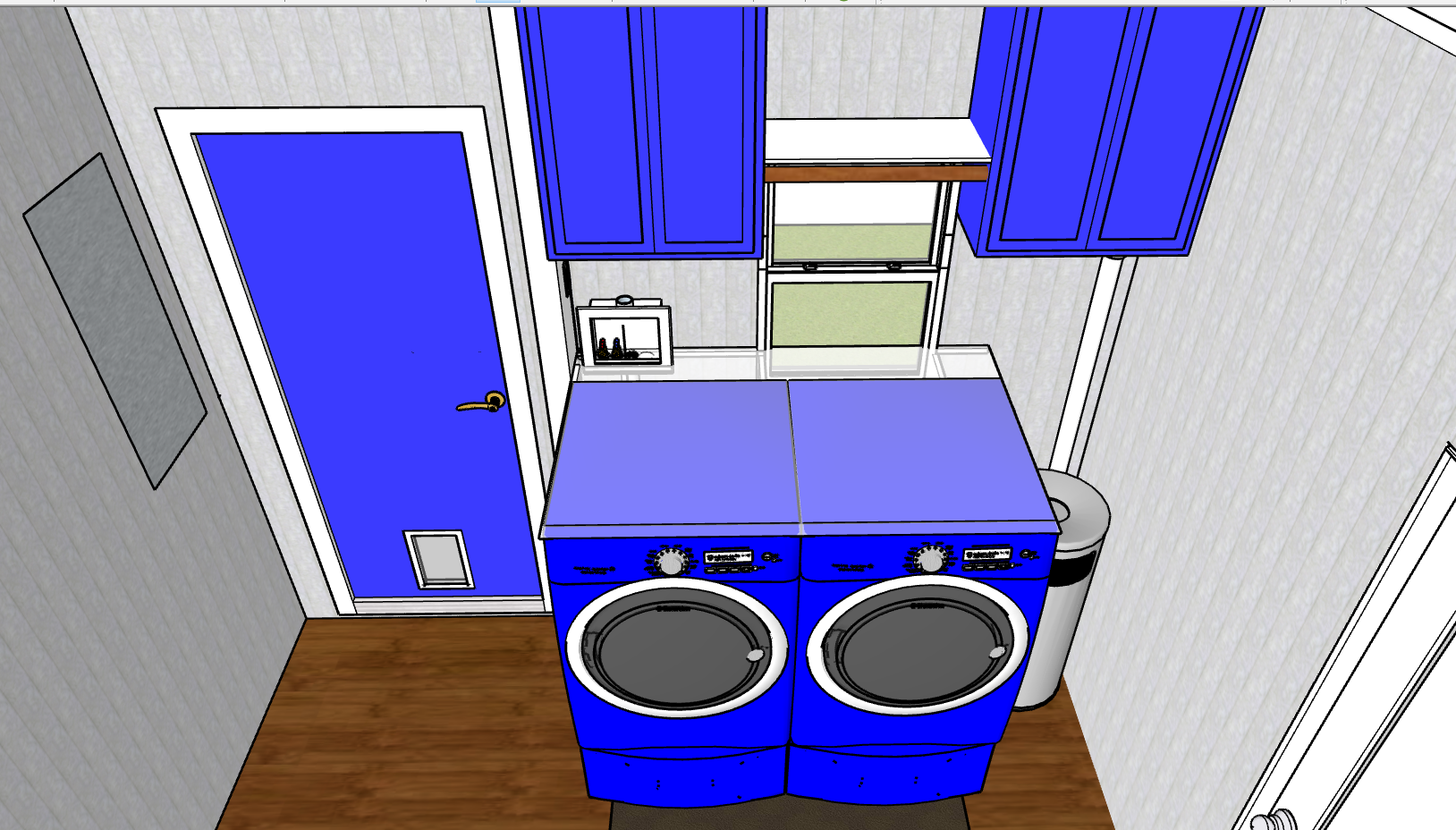 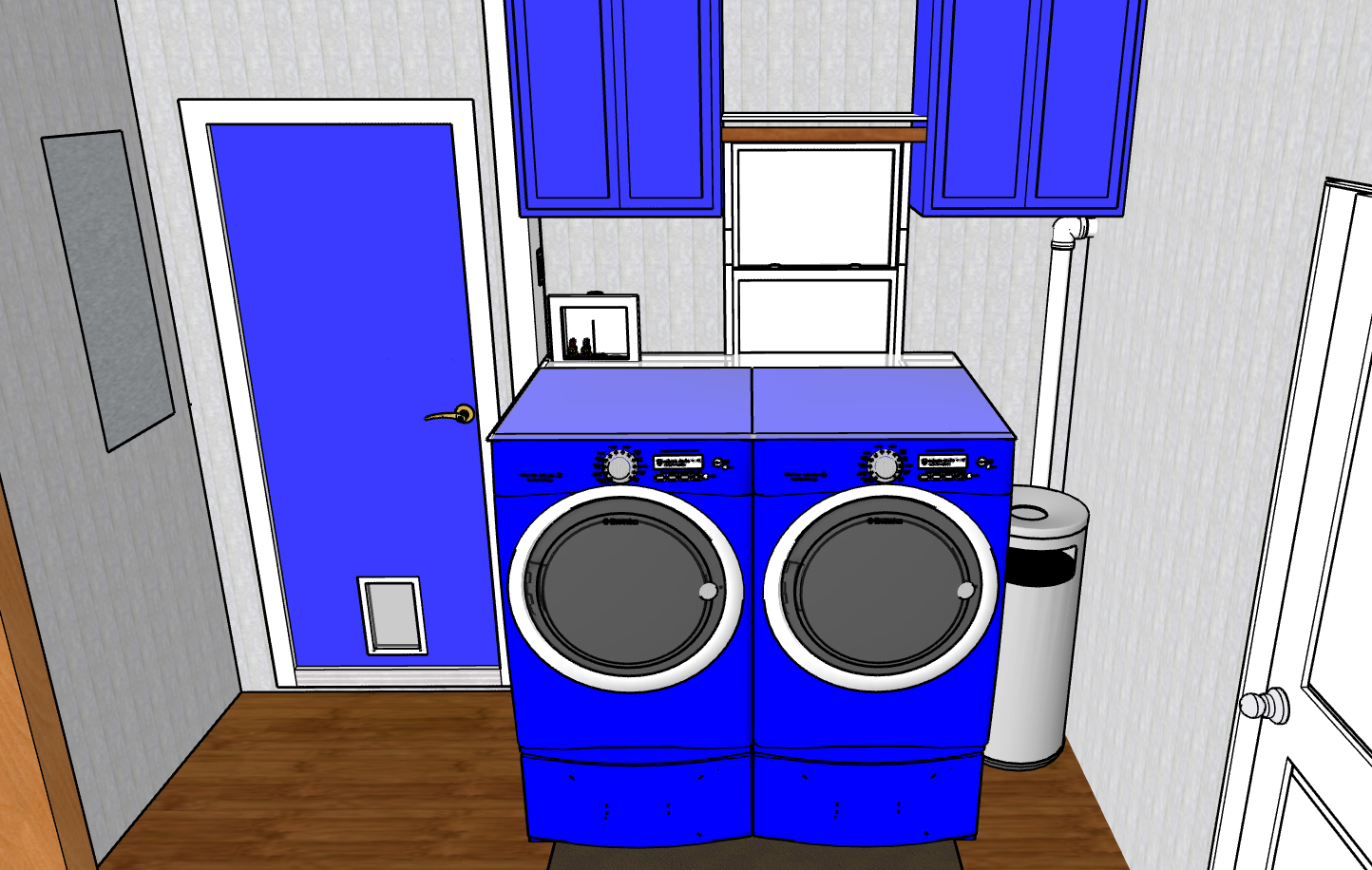 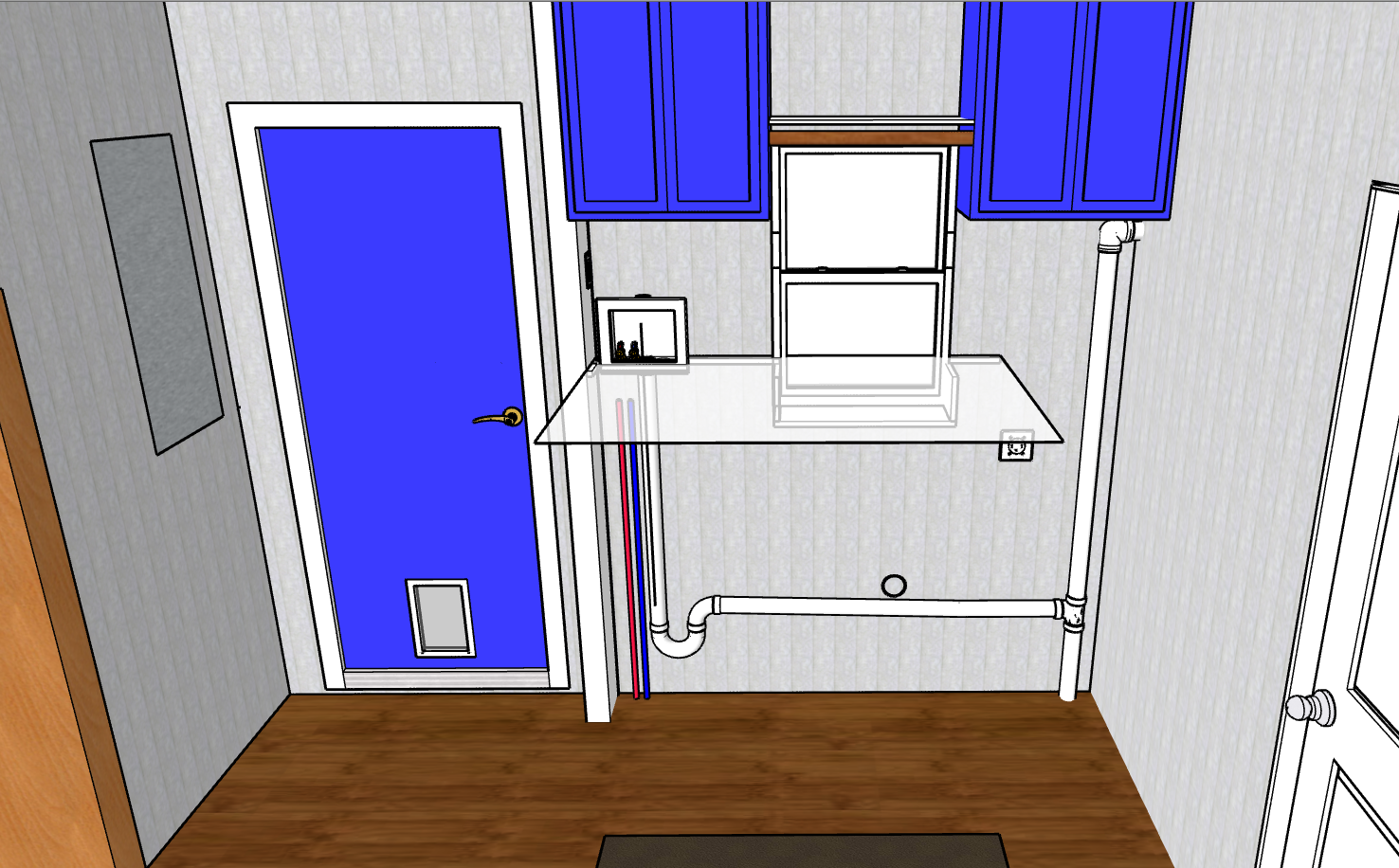 Location
somewhere between here and there

I'd slide the drier as far right as possible, then place the trash can under the window. This will allow emergency access out the window, make it brighter in the room, and hide the ugly vent pipe.

That is a thought but I wanted more space for opening the dryer and it would block an access panel to the bathroom plumbing. Right now the dryer is against the wall and the door bounces back at me when I open it. If I needed to mess with that I'd have to move the whole dryer. I like having them butted next to each other because it makes transferring laundry from on to the other easier. It would also make accessing the dryer vent a lot harder if I bumped it over more. Although, that is something to consider... I will see how it looks in sketchup. I like having a continuous surface to fold laundry on and place stuff on. I suppose I could make a removable board that can sit in between and then be able to move it to access stuff. And I could move the plumbing (as ugly as it is) back over to right next to the window so the drain pipe would not conflict with the dryer vent.
Hmm...
Thanks for the suggestion! I'll have to think about that. Might make some cardboard stand-ins the size of washer and dryer & see how it feels. I mean, worst case, what I usually do when pulling wet clothes out of the washer is set a basket below to catch it if it falls and then put it in the dryer. It would just be a little farther away and I could slide the basket over more.

Update: I did a mockup in Sketchup and didn't really like the look and the pipe would still have to go into the corner (meaning the trap arm has to go under the dryer vent) and the cleanout would not be easily accessible- nor would the access panel in the wall. If I had it just after the window it would block access to the dryer vent. So, I think I will stick to having the machines together so I'll have room to access the dryer vent and the access panel and cleanout.
Last edited: Sep 16, 2022

I just had an epiphany-- I've been wanting to run the toilet drain back to that southern exterior wall and tie in the vent and drain from the sink and trying to figure out how to deal with the wall supports. Then I realized I don't have to run the toilet drain that way. I could run it toward the east exterior wall-- but then I'd still have to contend with trying to get the vent in or around that wall and it runs away from the septic tank. So then I realized that if I run the toilet's drain toward the interior wall at an angle so it lands in the same stud pocket or adjacent stud pocket to the tub, I can have the vent go up into that wall and tie in to the main vent and the drain can go to the main soil pipe.

The lav will just need to have its own vent. I want to have it go into the wall with two 45s and then toward the top of the wall it will come out with a 90, go around the eaves, and then have a 90 to go above the eaves. The drain can go at an angle to tie in with the toilet's drain with a wye (should be able to line up if I angle them properly). If I need an bends then so be it but hopefully I won't. I'm just trying to decide if I want the 45s on the vent or the drain. 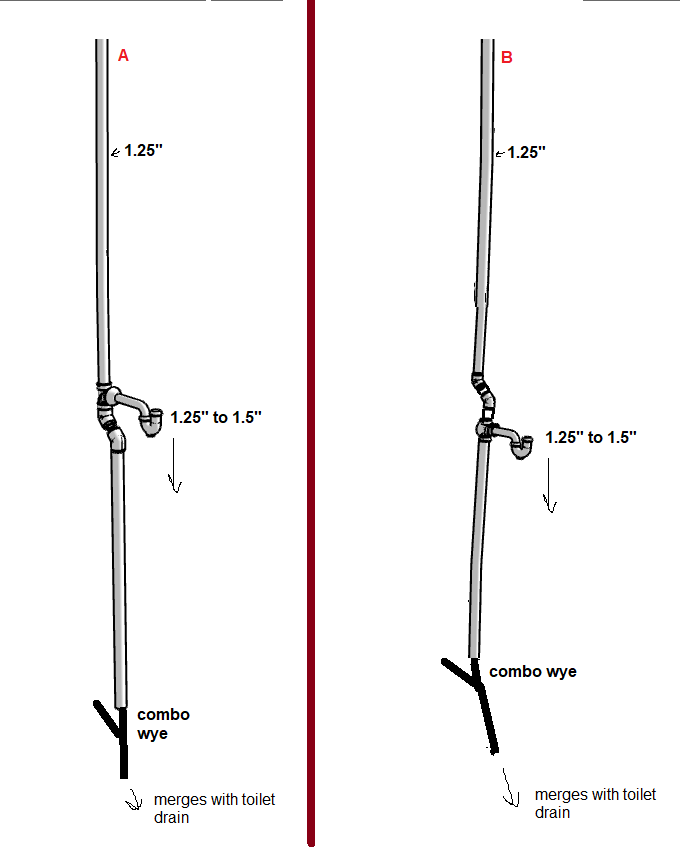 If I have 45s on the vent would it obstruct airflow? But I'm also concerned it could become a place for clogs if I have it in the drain.

So, my questions:
1. If I want the toilet drain to vent in the wall before the drain meets the main soil pipe, can I use a sanitary tee on its back with the sweep going against the flow of water and then continue on to a wye for the soil pipe connection?
2. Should I have the 45s to get the lav pipe into the wall on the drain side or the vent side?
3. Can I tie the sink's drain in to the toilet line before the toilet line's vent?
4. Are fernco saddle wyes a bad idea? 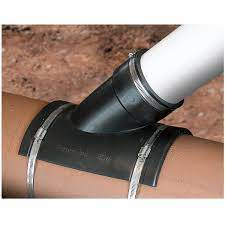 I forgot to draw in laundry vent connection, but it would be to the right of the main vent that is represented by a blue circle. Drain for laundry would tie in 5' downstream of the toilet connection. 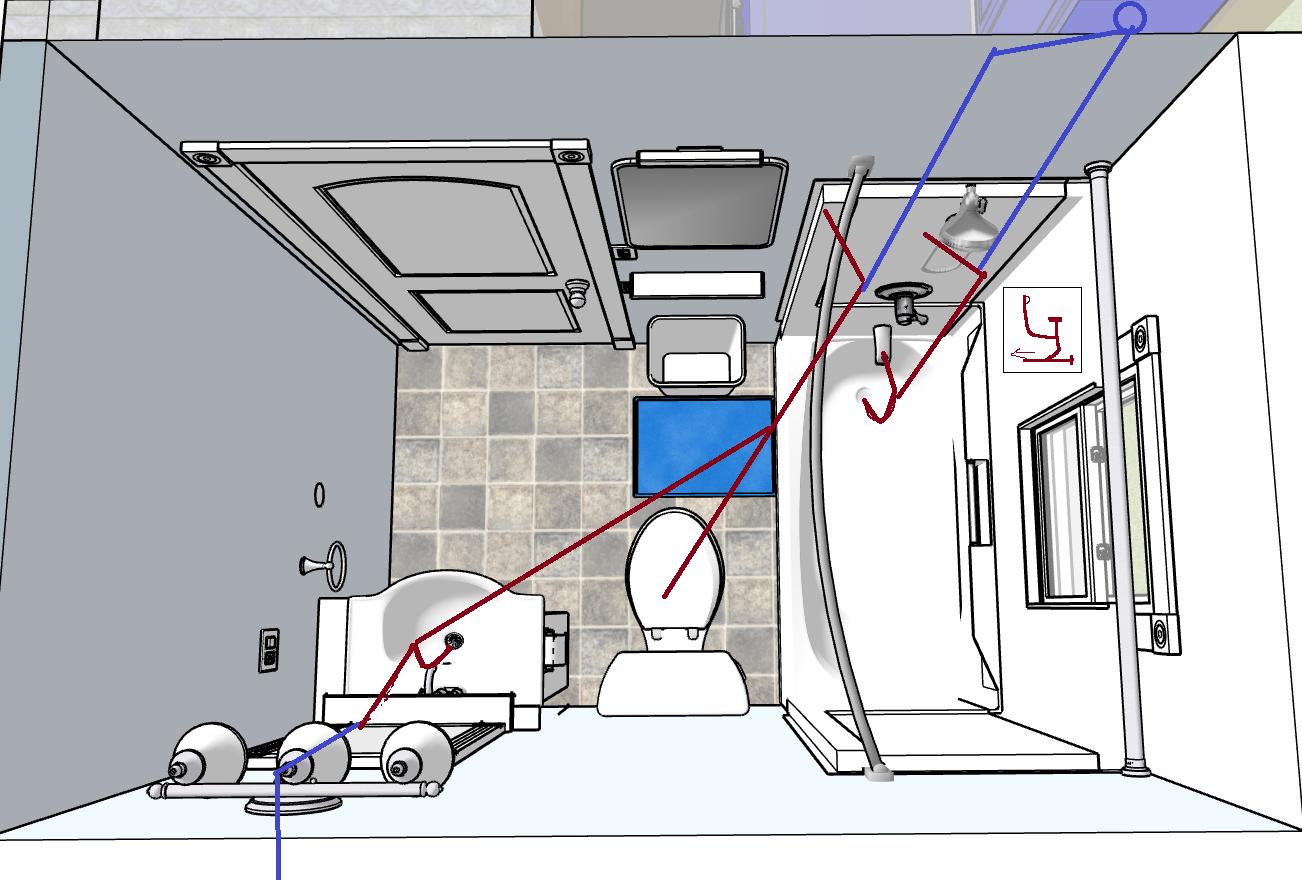 Any other thoughts or suggestions?
Last edited: Sep 21, 2022

I was looking up the code Frodo referenced about suds relief and found that it is obsolete with the newer front-load machines because they don't create suds. It also did not apply to single-family residential homes.

So, my current sketch: 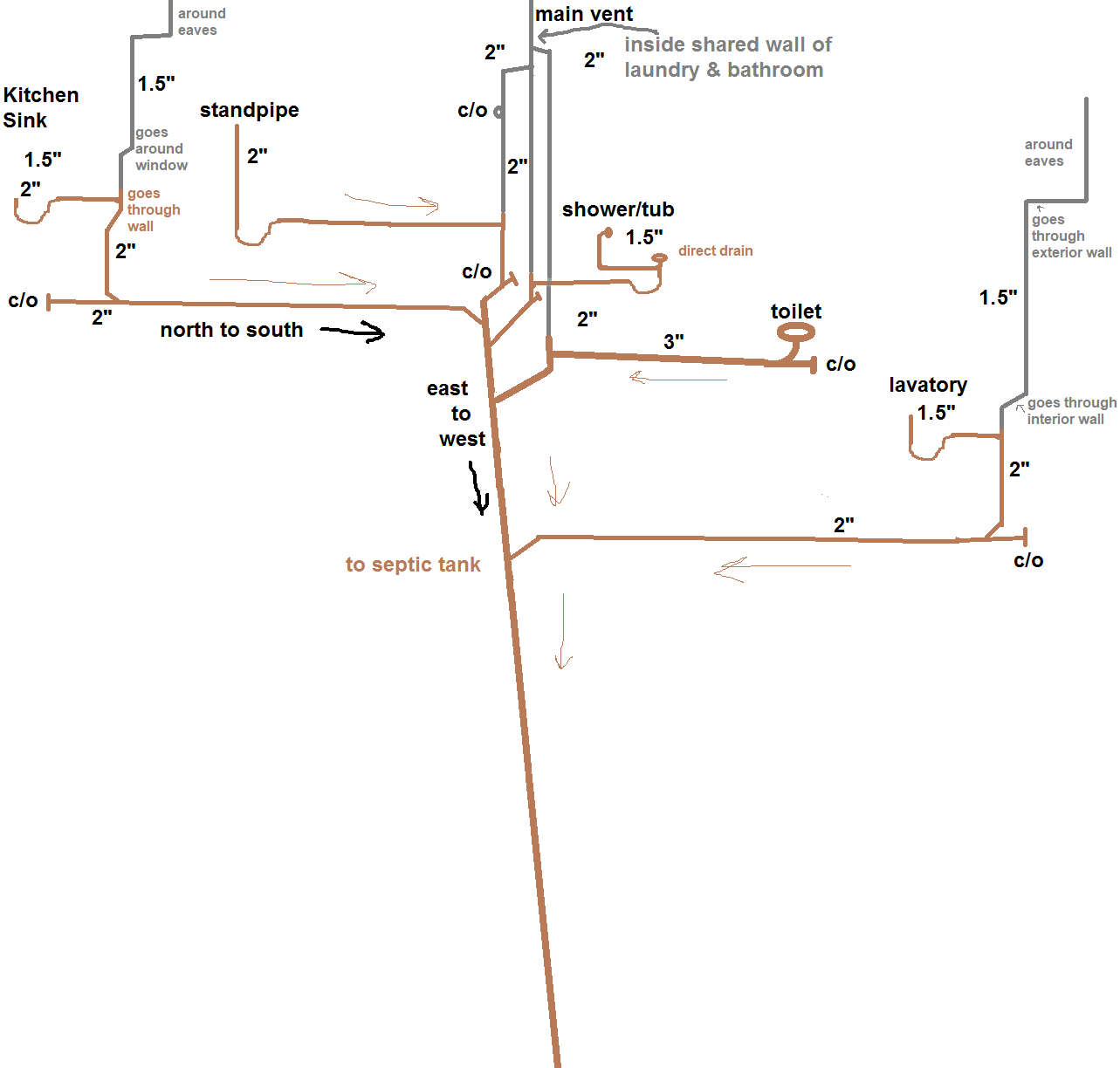 My concern now is that I believe the main vent pipe is only 2" and if I am interpreting things correctly it can only handle 6dfu. Toilet would be 3dfu, tub would be 2dfu, and washing machine would be 3dfu so it would be 8dfu. But the tub/shower will not be run while the washing machine is being run and the toilet won't be flushing while the shower is running so I think it should be OK. I can tie the washing machine in at the very end and have a cleanout, but I will still have a cleanout in the wall just in case something gets stuck higher up. I'll have an access panel on the wall behind the shower valve. I'm still trying to figure out stud placement in the walls and just how far over the main vent is. I know it is within the first stud pocket from the corner. I want to say its about 13" away from the corner.

I'm thinking of using this on the wall where the vent pipes come out: Low Profile Master Flash®

Register today and take advantage of membership benefits. It's FREE!

Enter your email address to join:

Did you know that registered members can turn off the ads?

Enter your email address to join:

Thank you! Please check your email inbox to continue.
There's already a member associated with this email address. Please log in or retrieve your password.
Already a member? Click here to log in
Top