By The Associated Press

MADISON, Wis.—Wisconsin’s governor activated the National Guard on Wednesday to protect state properties after a night of violence that included the toppling of two statues outside the state Capitol, one of which commemorated an abolitionist Civil War hero.
Gov. Tony Evers, who toured the damage from Tuesday night and said the violence was in “stark contrast” to earlier peaceful protests, said he was activating the National Guard “to make sure people can exercise their First Amendment rights while ensuring the safety of members of the public and state buildings and infrastructure.”
“If your goal was to advance social justice and policing reforms in the state of Wisconsin and making sure systemic racism is a thing of the past, you failed,” Evers said of the protesters on WTMJ-AM. 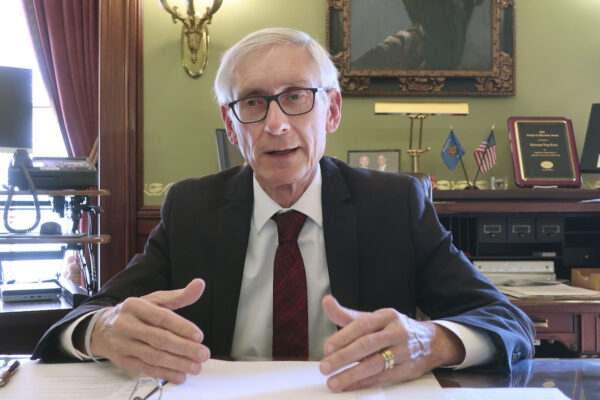 Wisconsin Gov. Tony Evers speaks during an interview with The Associated Press in his Statehouse office in Madison, Wis., on Dec. 4, 2019. (Scott Bauer/AP Photo)
The violence started Tuesday after Madison police arrested a man who came to a restaurant across the street from the Capitol with a bat on his shoulder. Video released by Madison police shows the man, Devenore Johnson, talking through a megaphone while walking around the restaurant’s outdoor patio and inside.
On another video released by police, as many as five officers can be seen taking Johnson to the sidewalk and carrying him to a police squad car after he resisted arrest.

Police said on Tuesday night a group of 200 to 300 people broke windows in multiple buildings, threw a Molotov cocktail into the city-county building, brought down the statues on the Capitol grounds, broke glass at a state office building and smashed windows and lights at the Capitol.
Democratic state Sen. Tim Carpenter was assaulted after taking a cellphone video of the rioters. “Punched/kicked in the head, neck, ribs,” Carpenter posted on Twitter around 4 a.m. “Innocent people are going to get killed.”
About 40 people who gathered Wednesday night outside the downtown county jail where Johnson was being held were peaceful as of 10 p.m., calling for his release.
Toppled Statues
One of the statues toppled, decapitated and dragged into a lake about a half-mile away was of Civil War Col. Hans Christian Heg. He was an anti-slavery activist and leader of an anti-slave catcher militia in Wisconsin who fought for the Union and died from injuries suffered during the Battle of Chickamauga. 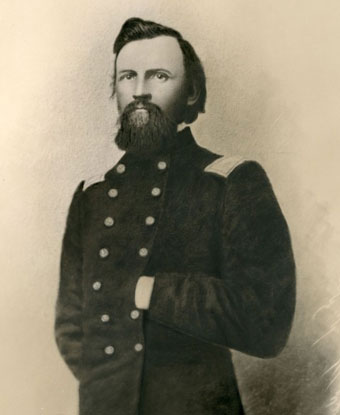 Hans Heg, an anti-slavery activist who was killed in the Civil War while fighting for the Union. (National Park Service)

The other statue taken down represents Wisconsin’s motto “Forward.” The statue was first installed 125 years ago but replaced with a bronze replica in 1998. It sat prominently outside the Capitol, facing the University of Wisconsin campus and State Street, an avenue lined with bars, restaurants and small businesses. That corridor has been the target of much of the vandalism since the death of George Floyd on May 25.
Madison Mayor Satya Rhodes-Conway said in a conference call for media later Wednesday that city leaders and law enforcement were working “on a number of fronts” to keep any additional protests calm.
“I am not in that room, I do not micromanage our law enforcement response,” she said. “There has been broad agreement among law enforcement that deescalation and protecting people is the top concern.”

MADISON, Wis.—Wisconsin’s governor activated the National Guard on Wednesday to protect state properties after a night of violence that included the toppling of two statues outside the state Capitol, one of which commemorated an abolitionist Civil War hero.

www.theepochtimes.com
He that wandereth out of the way of understanding, shall remain in the congregation of the dead. P21:16

We were just there at UW Health places on Tuesday. But circled the Capitol so as not to get into anything. A friend who is a Priest goes at 11 am each day to say and lead a Rosary. So sad this is giong on.
A